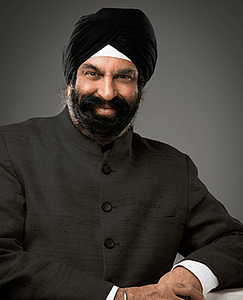 Mr. Kandhari was born in 1948 in India. He was educated in India and graduated with Honours from Loyola College Madras, where he was the Student Union President. He then went to further his professional education.

In 1976, Mr. Kandhari came to Dubai to grow the family business and formed the Al Dobowi Group. The group today is the leading management services provider in the UAE and has grown to have over 2000 employees and have a significant presence in Saudi Arabia, Nigeria, Ghana, Europe, and Canada.

Mr. Kandhari is a vivid golfer and is a founder member of the Emirates Golf Club where he was until recently the Club Captain. He is also a founding member of the World Trade Centre Club, He is also the Chairman of the Guru Nanak Darbar, Sikh Temple, Dubai – the First Sikh Gurudwara in the UAE; to name a few of his activities.

He has attended the G20 Interfaith Summit held in the Gold Coast Australia in 2014 and in Malaysia in 2015 as a delegate of the UAE Government to promote Interfaith Harmony & Tolerance.

Mr. Surender Singh Kandhari has won an award under the category of “Sikhs in Seva” which was held in London on 21st October 2012 organized by The World Sikh Awards, UK. He has won this award for his contribution to society through means of Seva (Selfless Voluntary Service) and an outstanding individual who has most excellently demonstrated exceptional leadership and vision when helping others by building the first official Gurudwara in the Middle East.

In the year 2014, the British Sikh Association honored Mr. Kandhari by the prestigious “Sikh Jewel Award” for his exceptional service, dedication & commitment to the Sikh community

Under the patronage of H.E. Sheikh Nahayan Mabarak Al Nahayan Minister of Culture and Knowledge Development Abu Dhabi, UAE, Mr. Surender Kandhari as a Chairman of the Guru Nanak Darbar Gurudwara Dubai proudly sponsored and hosted the First Annual World Interfaith Harmony Day in Dubai with eminent speakers and delegates attending from around the world on 3rd Feb 2016.

On the festive occasion of Baisakhi in April 2016 Mr. Kandhari was honored with the prestigious “PUNJABI ICON AWARDS” which is of international repute recognizing his achievement in Global Corporate Sector by the Punjabi Cultural Heritage Board (PCHB)

Felicitated by the NDTV Gulf Indian Excellence Awards on 11 Dec 2016 for a truly outstanding Gulf Indian Business Leader and as an inspiration for Indians across the globe.

Felicitated by “Punjabi Gaurav Award” on 11th April 2017 on the occasion of Baisakhi – in recognition of his selfless service towards the community by Punjab Association, India.

On 13th April 2017, The Sikh temple successfully hosted breakfast to 101 nationalities with an overall gathering of more than 600 participants and is the official and proud Guinness World Record title holder of ‘Most Nationalities Having a Continental Breakfast’

On 14th Sept 2017, Guru Nanak Darbar Gurudwara celebrated UN International Day of Peace. The event was organized in cooperation with the United Nations Development Programme (UNDP) UAE and supported by the Minister of State for Tolerance in the UAE. The theme “Together for Peace: Respect, Safety, and Dignity for All” showcased tolerance and camaraderie among those who attended the event at Gurudwara in Jebel Ali Village Dubai. Each year the International Day of Peace is observed around the world on September 21. The UN General Assembly has declared this as a day devoted to strengthening the ideals of peace, both within and among all nations and peoples.

On 30th October 2017, He attended the 2nd Athens International Conference on Religious and Cultural Pluralism and Peaceful Coexistence as a delegate of the UAE Government, headed by H.E. Sheikh Nahayan Mabarak Al Nahayan Minister of Tolerance.

On March 18th, 2018, in celebration of the World Sikh Environment Day and the Sikh New Year, Guru Nanak Darbar Gurudwara distributed plant saplings to the students of Delhi Private School UAE. The event was in line with The Year of Zayed, commemorating the life, values, and achievements of the late Sheikh Zayed bin Sultan Al Nahyan. This event was applied to Guinness World Records as an official attempt and convincingly broke the current record and was declared the official Guinness World Records title holder of ‘Largest Distribution of Saplings’ for distributing 2,083 saplings.

On 16th June 2018, felicitated by the Literary Excellence honor by Bharat Nirman Foundation for the contribution in the field of Inter-faith.

Felicitated by the Republic TV Gulf Indian Leadership Summit and Awards on June 24th, 2018 in recognition of his success and leadership stories.

The only Indian to attend the Ministerial to Advance Religious Freedom Conference in Washington DC in July 2018 as a delegate from the UAE Government representing the Sikh Community.

On Sept 6, 2018, H.E. Sheikh Nahayan Mabarak Al Nahayan, Cabinet Member and Minister of Tolerance UAE, released Mr. Surender Kandhari’s autobiography “Temple of my Dreams. The book has four major strands. It stands as a testament to the creation and development of an industrial empire that now employs over 2000 people, gives one an inside look into the tyre and battery industry on a global scale and provides signposts to young entrepreneurs on how to set up their businesses. The book is also a personal account of an extraordinary life and how these factors are bound together by the inspiration derived from the construction of the Guru Nanak Sahib Gurudwara in Dubai and how this incredible house of worship was conceived and turned into reality, that being the core basis for the title of the book.

Awarded the prestigious Indywood Excellence Awards in Dec 2018 in recognition of the notable efforts and the outstanding contributions made to the Indian economy.