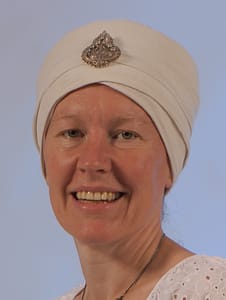 Nam Prakash Kaur was drawn to Kundalini Yoga (as taught by Yogi Bhajan) in 2008. As is often the case, this was initially just doing the odd DVD  and a few classes held at a home education festival she’d brought her 4 young sons to. Coming from East Yorkshire in the North of England there were few options for continuing the practice so she signed up immediately for the Level 1 teacher training. Originally, like many students on this course, she had no intention of teaching (and little idea of what she was getting in to!)- she just wanted to be a better Mum, partner, daughter, friend… and recognised innately the power of the Kundalini teachings to help her achieve this.

She qualified Level 1 in 2010 and has recently (April 2019) just completed Level 2 and become an intern on the Aquarian Trainer Academy path to Lead Trainer – so much for not wanting to teach it!

One of her great joys is reflecting on what this practice has done for her and her family. Her second son, Jot Prakash Singh, qualified Level 1 in 2017 and together they now offer live sadhana music wherever they travel. They are also in the process of setting up a (W)holistic centre near where they live, The Rising Dawn Sanctuary. Here they offer Kundalini Yoga teacher training, levels 1 and 2 with iSKY, gatherings for the turning points of the year, festivals and other workshops and retreats related to rediscovering our Infinite nature. Anyone travelling in the UK with Sikh Dharma Universal is welcome to come and use our centre for workshops or merely as somewhere to use as a base to sightsee. We are about a half hour drive from the ancient city of York and in beautiful, rural countryside.

Nam Prakash found Kundalini Yoga during the middle of her training as a Gestalt Psychotherapist and was fascinated by the power of bringing both of these healing modalities together. Watching Yogi Bhajan work with his students it became apparent to her that many of the techniques he employed were in the Gestalt toolbox also and Gestalt has its roots in Eastern philosophies. She now enjoys running workshops that take themes from both these traditions which she has called “Welcoming the I-Thou”. They allow Kundalini Yoga students space to discuss their process (hard to find in a general class setting) and those from counselling and other backgrounds can discover the benefits of the yoga! More information about these and other workshops she runs can be found on her YogaPsychotherapy website.

She is extremely grateful to have met Bhai Sahib Satpal Singh and assist him on the 2016 Degh Tegh Fateh Yatra to India and to have been invited to represent SDU in the UK. She looks forward to humbly serving anyone with SDU visiting the UK in the future in any way she can.