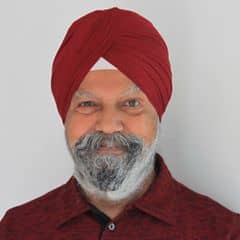 Parminder Singh Soch, a senior journalist is currently associated with the most prestigious, renowned, and widely watched JUS Punjabi Broadcasting T.V. Channel, based in New York, USA, as Bureau Chief in the entire State of North Carolina, USA.  He is responsible to cover news stories and procure advertisements for the aforesaid TV Channel.  JUS Punjabi Broadcasting TV can be viewed in USA, Canada, Australia, New Zealand, UK and India.  Parminder Singh Soch has almost fifty-nine (59) years of experience in the field of journalism.  He started his carrier with Khalsa Advocate, a weekly newspaper, an official organ of Chief Khalsa Dewan under the Member-In-Chargeship of Dr. Jaswant Singh Neki, who at one time was Director of Post Graduate Institute (PGI), Chandigarh, India, Professor and Head of Psychiatric Department at All India Medical Sciences (AIMS), Diplomat of World Health Organization (WHO) in Tanzania and Sahit Academy Awardee.  After serving that newspaper, he moved to Chandigarh and worked as an assistant Press Correspondent to various vernacular newspapers including daily Prabhat, Jathedar, Ajit, Akali Patrika, Pradeep, Ranjit and Tej Urdu.

Parminder Singh Soch also assisted in editing “Mel Milap” a weekly newspaper in Chandigar.  After obtaining more experience, he was offered a job with “Parkash” daily newspaper as an Assistant Editor.  At the same time he was also editor of a monthly magazine “Punjab Krishak Samachar” for the welfare of Punjabi farmers.

Parminder Singh Soch did not stop there, he kept on climbing forward steps in journalism.  Giani Zail Singh, the then Vice President of Punjab Pradesh Congress Committee and a close associate of Late Sardar Partap Singh Kairon, the then Chief Minister of Punjab, offered him a job in his daily newspaper, “Khalsa Sewak” in Chandigarh.  After gaining lot of experience, he decided to move back to his hometown Amritsar.

Late Sardar Ujjal Singh, the then Governor of Punjab and also President of Bhai Vir Singh Sahit Sadan, offered Parminder Singh Soch a position in “Khalsa Samachar” the oldest Punjabi weekly newspaper, once founded by Bhai Vir Singh, the father of Modern Punjabi literature.  He served that newspaper for about seven years and during that time he wrote hundreds of articles and editorials on Sikh religion.  He also wrote on Punjab’s social, cultural, economic, political, national and international issues.

When Door Darshan Kendar decided to establish their first transmitter center in Amritsar and started to broadcast their only one news bulletin at 11:00 PM, Parminder Singh Soch was hired to prepare the news bulletin.  He served Door Darshan Kendara for about seven years and trained many anchors to telecast news on the television.  He had close contacts with Singh Sahib Yogi Bhajan Singh ji and his close associates including Dr. Gurcharan Singh Khalsa, Dr. Subegh Singh and Satjiwan Singh Khalsa.  He is still a close friend of Bhai Sahib Satpal Singh Khalsa, Ambassador Sikh Dharma of Western Hemisphere.  He moved to America in 1983.  Since then, he has not stopped writing articles on religion, politics and on current affairs.  He is very vocal and bold in his writings.  He wishes India and his own State Punjab to prosper.

Parminder Singh Soch’s ultimate goal of life is to spread the message of Sri Guru Nanak Dev Ji, who is well wisher of the entire Universe.  As the concluding sentence of Sikh prayer is “Sarbat Da Bhalla”, mostly this phrase is interpreted that Sikhs wish wellbeing of all human beings irrespective of their caste, color, creed, religion, race and or nationality.  But according to Guru Nanak Dev Ji’s philosophy the true interpretation of this phrase is totally different.  What Guru Ji actually means is to wish wellness of everything, not only of human beings, but also of animals, birds, all kinds of creatures, sea animals, insects, greenery, nature, air, water, mountains, rivers, oceans, small rivulets, space, all the planets, sun, moon, stars, milkyway, all the visible and or invisible objects.  And this is called Universalism.  Sri Guru Nanak Dev ji preached Universalism and not any particular single faith or sect.  He is the real and true Messiah of One God.  Fortunately, this year, Sri Guru Nanak Dev Ji’s 550th Birthday is being celebrated all over the world.  The true tributes to him would be to respect the Universalism of One God, preached by only one Guru, Sri Guru Nanak Dev Ji and then followed by his nine predecessors and the present living Guru Sri Guru Granth Sahib Ji.