Me and My God: Nanak Alerted Me That God Did Not Create Man in His Image, Rather It Was The Other Way Around.

For centuries, we have been made to believe that God created man in His image. However, when Nanak took over to tell us the truth, he began to tell me that it was the other way around. In fact man created God in his image, an anthropomorphic god.

I am using this term, anthropomorphism, to describe a God with the attributions of a superhuman who exhibits humanistic characteristics; he is a perfect, all-powerful, and all-knowing superhuman. This God has a place of residence several skies away, with the capability of knowing everything that is happening with everyone on earth. Such God possesses powers to do justice through punishments and rewards.

He listens to prayers and accepts gifts to grant favors to the favorites or punish adversaries, and he also punishes those who do not believe. He determines and changes the destinies of people and nations. He has the ability to appear or disappear at will. He may be born outside of the womb and die at will.

Such an anthropomorphic God manages humanity through staff like angels, messengers, demons, devils, etc. His representations in various physical forms, such as prophets, scriptures, statues, and paintings need and accept materials that are there to meet human needs. They include clothing, food, temperature-controlled environments, flashy means of transportation, courtiers, fine music and dancers, etc.

To create an anthropomorphic God was man’s sure way to appoint himself as God’s agent and as his administrative authority. Further, this opened the way to create and deepen communal identities. It permitted retreat into the very segregated wedges and fractions between and among various faiths and faith communities.

The worst of all is that this anthropomorphic God made it easier to keep Man apart from the real Creator, God that was manifested in all creations. Nanak called it Ek Ongkaar.

Since the time that Nanak came on this earth, he began telling the truth. He gave me and others, without any discrimination, new and innovative eyes of knowledge with vision and wisdom. He let me examine the question of God more logically.

He taught me and given me the healing eyedrops of spiritual wisdom so that with my spiritual eyes, I visualize the Creation

As the benefacyor of the new wisdom, I began to call myself a Sikh, meaning a wisdom seeker. Then, I felt no need to be obsessed with an anthropomorphic god sitting on his throne in heavens and loaded with extensive secretariats as well as numerous other means of enforcing obedience among us to their god.

In contrast to man’s earlier exploits, Guru Nanak told me of the single virtual reality. Also, it was not far from my eyes; I could see it in nature and in the creations all around me, and all within me. He named this reality, Ek Ongkar, meaning, one virtual reality manifested in all creations. That, the forces of creations and the laws of nature actually maintained a beautiful world for me to relish. Here everything has been functioning meticulously since the time immemorial.

And, above all, I need not live in a fear of the angels of death, haughty and cruel, waiting to take me to imaginary heavens and hells. They are not there anymore to scare me and to torture me.  Instead, Nanak told me that this world is created for me to relish, and, that it will be always there in my service, not to fear but to rule. Nanak said,

Other living forms are your water carriers (servants); in this world, you are the ruler.

Guru Nanak told me that life was an opportunity to seek and merge with the Divine and her creation. 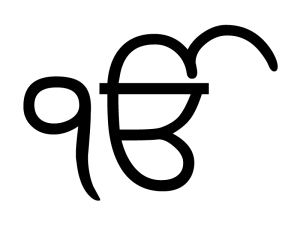 This article is the courtesy of Dr. Harbans Lal.

You can find the original article at: https://seekingwisdomblog.wordpress.com/2019/04/24/me-and-my-god-nanak-alerted-me-that-god-did-not-create-man-in-his-image-rather-it-is-another-way-around/