Some years ago, I acquired the writings of Max Arthur Macauliffe (10 September 1841 – 15 March 1913), an English translator of Sikh scriptures and historian of early Sikhism. I was wonderstruck to observe the title quotation the author chose to display on the opening pages of his work.

Macauliffe was born and educated in England and was working as a British high administrative official in India at the time of his writings.

While in India, Macauliffe was fascinated with Sikhi, the path of Guru Nanak that he closely observed during his frequent visits to the central places of worship for the Sikhs. So much so, that his British colleagues began to describe Macauliffe as a “turned Sikh”.

Macauliffe was indeed a turned Sehajdhari Sikh, meaning that he adopted Sikhi as his religion without being formally baptized.

Sikhs recognized Macauliffe as their own and his portraits are still found on the walls of Sikh historical institutions along with other pioneering Sikh scholars or the other pioneers of the Singh Sabha era in the Indian subcontinent.

The quote Macauliffe chose to inscribe on the title pages of his volumes is from Guru Granth:

The eggshell (of misinterpretations, doubts, continuous practice of mistaken stereotypes and beliefs), has now been broken and my mind has been enlightened and liberated.

Although Macauliffe used the verse to describe his attainment on the path of the Guru, the verse also implies is that if an outside force breaks the eggshell around us, our life and entity will end. Instead, if we break the suffocating shell under the true guidance of our Guru, new life will begin.

It may also bring to mind what Lord Buddha is quoted to have said several centuries ago:

Of those beings who live in ignorance, shut up and confined, as it were, in an egg, said Lord Buddha, I have first broken the eggshell of ignorance and alone in the universe obtained the most exalted, universal Buddhahood. 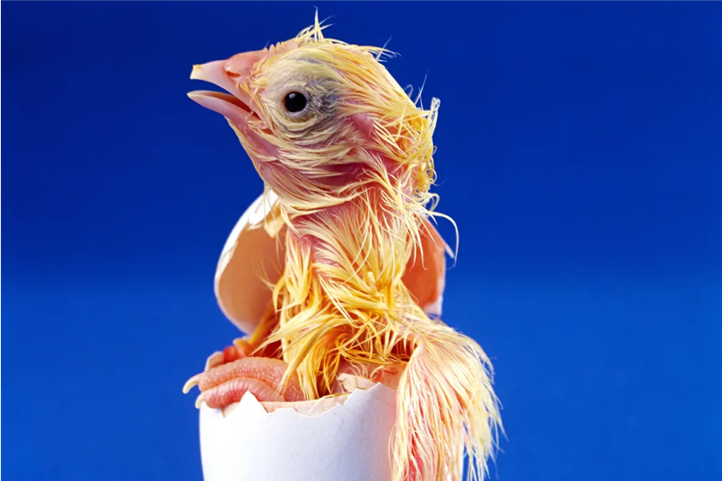 The lesson is that chicks need to peck their own way out of their shells. It’s hard for an egg to turn into a bird; it certainly harder for it to learn to fly while still in the egg.

Without the strength and readiness developed by their own struggle, chicks are left vulnerable. Others will smash the eggshell, resulting in irreparable injury or simply a death.

The truth is that we, as a group, seem to be becoming blind inside the eggshell of near vision by our practices and attitudes. The influence of our uneducated and badly trained clergy is hardening the eggshells around us.

We need to come out of the eggshell by our own efforts to be productive and to realize our full potential. If we do not come out by our own efforts, someone else will break the shells around us and either we will be dead or roasted in a pan to become a food delight for others.

Exit from the Eggshell

There are two types of breakouts: suicidal and therapeutic, meaning one to kill and others to cure. Our Guru in the cited verse above prescribes the later and warns against the former.

The break will be suicidal if we wait until an outside force cracks the eggshell. That force may be another religion, philosophy, any wind of agnosticism, a newer social fashion or environment, a political force, or any destructive enemy around us.

On the other hand, the break can be therapeutic if we do it with our own endeavors under the true guidance of our SABD guru.

Our gurus in their lives gave many examples of stereotyped practices that people allowed in the rituals of their religion.

We are familiar with Guru Nanak going to the famous place of Hardwar. There, he saw people throwing water of the river Ganges toward the rising sun of the East, meaning the places of their ancestors. He immediately began to throw water toward the West where lied his farmland. When questioned, he elaborated that the water thrown in ignorance under the influence of a blind faith would reach neither his farms nor their ancestors or the Sun.

Similarly, on another occasion, Guru Nanak pointed out that God did not live in any one direction. Likewise, he illustrated that if your mind was not with you in prayer, you were not praying; you were just making lip or body movement. In the Guru periods, there were numerous more examples. And, in the body of our SABD guru eternal, the Guru Granth, there are thousands of such teachings.

What is alarming is that when we look at our own religious and social practices today, how many of them we exercise in the darkness of the eggshell around us. There are many and many.

We continue to have the SABD guru read by proxy, and without listening to the Guru’s advice. We bring food in the gurdwara for guru’s bhog lage, meaning for SABD Guru to break the bread to sanctify it; we continue to change Guru Granth’s clothing to be suitable for winter or summer wear. We continue to quarantine our women folks in the gurdwaras’ century halls and in “langar” halls. We continue to ban women from singing kirtan in Darbar Sahib Amritsar or touching the Gur Granth when the Granth Sahib is carried between Hari Mandir and Akal Takht, every night. Women may also not participate in the washing of the floors of Sri Harmandir Sahib. We continue to ban a woman from reading and reciting the SABD verses during periods of menstruation.

Classifying pieces of the external dress as articles of faiths is common. Sticking to the language of a region to be the divine script is sternly enforced. Brahmanical beliefs in rituals practiced in the places of worship, inability to approve adequate seating for the aged and handicaps, are other examples.

Stereotypes are used by self-appointed babas to enslave innocent Sikh men and women in Indian villages. They promote treating SABD guru as a human body in every detail. They promote Akhand paaths without regard to anyone able to grasp what our Guru was saying.

Politically, is that not the fact that we are at odds with every central administration in India, no matter it is one political party or the other that occupies the throne of the central government in India?

In conclusion, I could go on with more examples and have done so in previous writings. The bottom line is that we need to bring back the religious culture that enables us to peck our way out of our shells.

With a few exceptions, we are becoming chicks in eggshells. We cannot go on indefinitely being just an ordinary, decent egg. We must be hatched instead of letting it go bad. Without the strengths developed within our struggles under the guidance of the SABD guru, we will be left vulnerable to outside forces that are in the hands of others.

It is time to wake up to the call of our Guru expressed in the above-cited verse employed by Macauliffe for his enlightenment.

This article is the courtesy of Dr. Harbans Lal.

You can find the original article at: https://seekingwisdomblog.wordpress.com/2020/01/14/time-to-break-eggshells/